Grand Rapids #2 on List of 25 Cities Millennials Can Afford & Want to Live in!

Photo by Holly Ravazzolo for the Riverfront Times

This is a list for the rest of us twenty- and thirtysomethings who can’t afford to spend $2,500 to live in a closet in Bushwick.

The Penny Hoarder has developed a definitive list of the top 25 coolest and most affordable cities for millennials. It’s based on a rigorous analysis of housing and local price data, economic statistics and something called a Coffee Fanatic Score. Yes, you read that right. (Thanks SmartAsset!)

You probably haven’t seen many of these cities on “Top Millennial City” lists before, and that’s for good reason.

These are cities where young people crippled with student loan debt can actually find workand afford a one-bedroom apartment, but also find a new brewery or wine bar on weekends. Their millennial populations are growing — or already sizable — and they tend to be better for walking or biking to work. 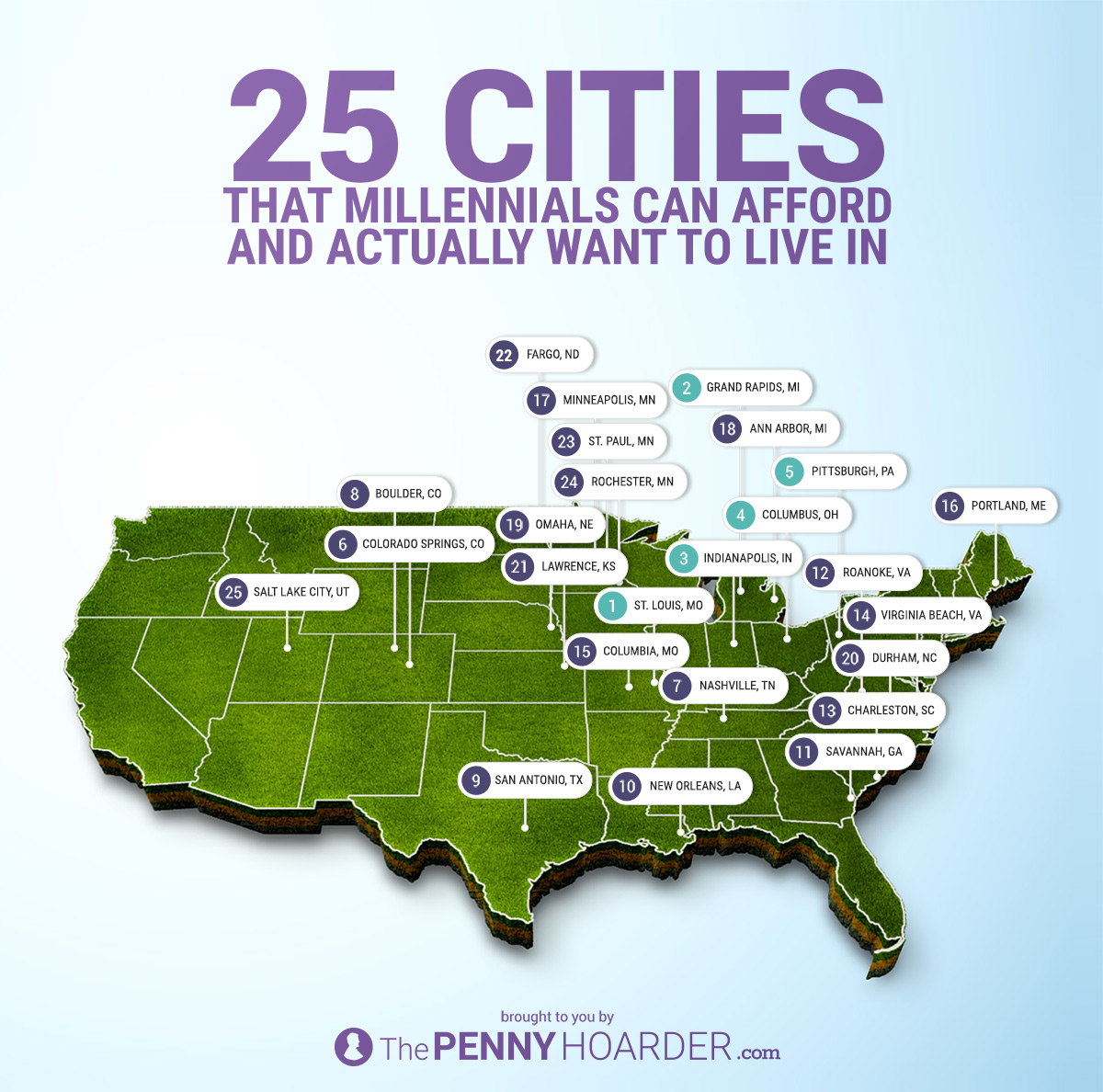 Ashley Harvey, a 27-year-old writer for the equestrian publication Heels Down Magazine, was a little taken aback to find Grand Rapids on the list.

“It surprises me to consider it affordable because the housing market is growing so rapidly,” she said. “But I guess compared to either coast it’s not bad.”

Although rent for a one-bedroom apartment is around $840, the cost of everything else plus the influx of millennials pushed Grand Rapids into No. 2.

That’s because of two words: beer and jobs.

At 3.4% and falling, Grand Rapids has one of the lowest unemployment rates in the country.

“There’s also a bunch of different music scenes, so it doesn’t surprise me that it’s a millennial hotspot,” Harvey says. “East siders say that Grand Rapids is overshadowing Detroit’s comeback.”

Things to do: The 158-acre Frederik Meijer Gardens & Sculpture Park combines several millennial darlings: community, art, the outdoors and music. And, as mentioned above, craft beer is so big in Grand Rapids, there are actually hotel packages based around it.

What to Know About the Current Grand Rapids Real Estate Market

The real estate market has undergone considerable fluctuation in recent years affecting both buyers and sellers. If you are looking into purchasing a home for ...

Grand Rapids, Michigan, is one of the Midwest’s fastest-growing and most exciting cities. Grand Rapids has a population of almost 200,000, and the total ...

The Definitive Checklist for Finding Homes with More Space

Finding the ideal home for the needs of your family is no easy task, but it can be an exciting one. Often, the driving factor for buying a new home is the need...

Residential Market In Grand Rapids On The Upswing!

The Preserve Townhomes construction project in Spring Lake by PURE Real Estate Management is one of many underway to meet the demand for residential housing. ...

The Most Common Problems Uncovered in Home Inspections

Very few home inspections ever come back completely clear. Indeed, 86% of buyers who recently had a home inspected said their inspector identified at least one...

Amongst the breathtaking scenery and inviting atmosphere of Grand Rapids, Michigan, is a variety of activities that the whole family can enjoy. These six famil...

Check Before You Prune!

Government urges everyone to check their gardens for tiny eggs before they prune. Here’s why!

Grand Rapids is No. 1 City For Millennial Homeowners

Grand Rapids has the highest millennial homeownership rate in the U.S., according to a recent study.A report by Porch found 56.8% of millennials in the Gr...

Nestled in West Michigan, on the banks of the Grand River, is the city of Grand Rapids, ranked as one of the best housing markets in the country, Whether you'r...

If you have a family, one of the most important things to consider when searching for a home in Grand Rapids is the school district. Grand Rapids, Michigan, ha...

Top 5 Things To Do in Grand Rapids

Located 40 minutes east of Lake Michigan sits Grand Rapids, the second-most populous city in all of Michigan. For many, relocating to Grand Rapids for family, ...

Spring curb appeal can make or break the sale of your home. That doesn’t mean you have to spend hundreds or thousands of dollars on spring landscaping, t...

Millennials are About to Trigger a Major “Changeover Point’ for The...

A fundamental shift in the spending habits of U.S. millennials will have an incredible impact on the world’s largest economy, according to the...

Transform Your House into a Smart Home Smart homes aren’t the future of real estate – smart home technology is already in homes today and soon beco...

Buyers might want to sit down for this: Homes flew off the market like the hottest of hotcakes in the first quarter of the year—causing price...

Some great ideas if you’re thinking of remodeling your kitchen!

GRAND RAPIDS, MI - Thanks to its growing economy, West Michigan's housing market has shot up to No. 13 on a "hotness" index created by Realtor.com, jumping pas...

Owners Most at Risk of Home Improvement Scams

Home improvement projects present the biggest opportunity for scammers to take advantage of homeowners, according to the Better Business Bureau’s Ri...

Sellers looking to get the best price know that curb appeal plays a huge role in getting buyers through the door. Once the flowers fade and the temperature dro...

Marble, or metamorphosed limestone, is a beautiful natural stone, with each rock unique to where it’s found and how it was formed. It has been in existen...

Wall choices may seem ho-hum and routine. But innovative design professionals and entrepreneurs have developed new choices that you as a real estate pr...

Why You Really Need a Home Inspection

Buying a house is probably the single largest investment you’ll ever make, and you want to ensure you get the best value for your hard-earned dollar. Th...

Grand Rapids #2 on List of 25 Cities Millennials Can Afford & Want ...

Photo by Holly Ravazzolo for the Riverfront Times Forget San Francisco, Washington D.C. and New York City.This is a list for the rest ...

The Hottest Real Estate Markets to Watch in 2018

Grand Rapids, MI is #1 on this list! On the mighty banks of the Grand River, Michigan’s second-largest city is at the top of our list largely due to its...

While living in one of America's major cities like New York, Los Angeles, or Miami may sound glamorous, it's no secret that the lifestyle in those places...

Every year, U.S. News & World Report, a global authority in rankings and consumer advice, releases its list of the Best Places to Live in the United State...

The overall fundamentals in luxury housing are stable and strong, according to the highly anticipated 2018 edition of “The Report” presented by th...

The Great Lakes region is known as America’s “Third Coast.” Sure, you might be hundreds of miles from the nearest ocean, but you’ve got...

7 Housing Markets Poised for the Most Growth in 2019

Several surprising housing markets are expected to see big growth in the new year. Strong economies and a flood of new residents moving in ar...

Grand Rapids Suburb Is the “Best City” in Michigan

East Grand Rapids is the “best city to live” in Michigan, and it ranks No. 22 out of the 50 best cities to live in the U.S., according to a report ...

Grand Rapids Is the 15th “best” Housing Market in Us

Grand Rapids ranks among the “best” cities in the country for buying a home.WalletHub, a Washington, D.C.-based personal finance website, recently ...

Grand Rapids is one of the hottest markets for Gen Z homebuyers, according to a recent study, but the youngest generation still only makes up a small share of ...

There are plenty of cities across the country where millennials are buying homes, and Grand Rapids is among their hottest targets. (See Article)A report from I...

The Ultimate Guide to Water Heaters at Home

Water heaters are one of those appliances that usually sit forgotten in a basement or utility room until something goes wrong. When it does, it can put a serio...